Book Review: The Devil All the Time 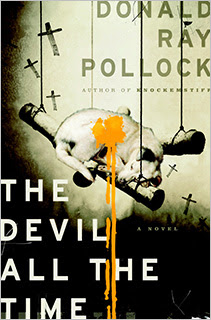 If you're a fan of crime fiction and don't mind when it bleeds over into Southern Gothic, then do not miss Donald Ray Pollock's first novel, The Devil All the Time. Critics and readers are comparing his work about the sinning and redemption that takes place by sweaty characters in small hick towns to Flannery O'Connor's. That's a spot-on comparison, especially when compared to O'Connor's novels Wise Blood and The Violent Bear It Away, but I would add that some of the more repugnant scenes remind me of my first—and only—Erskine Caldwell book: Tobacco Road. (My constitution was too weak to mark off any more books from Caldwell's bibliography.) If you haven't read Caldwell but have seen the movie Baby Doll directed by Elia Kazan and written by Tennessee Williams, then you'll know what I'm talking about.

Devil kicks off with Willard Russell's story. Willard returns from his tour of duty in the South Pacific, unable to shake the image of a skinned and crucified soldier—very much alive—he came across one day on patrol. Tortured by nightmares of his war experience, he gets many years of reprieve when he falls hard for and marries a gentle waitress named Charlotte; they have a son together named Arvin Eugene, who becomes the hub of the story. When Charlotte gets cancer, the devout Willard tries to cure her through prayer. When Charlotte's cancer spreads, Willard makes more visits to the prayer log in the woods near his house, taking along young Arvin to pray until he's hoarse, too. As the cancer eats away at his beloved wife, the desperate Willard begins supplementing his prayers with animal sacrifice, starting small and progressing to sheep and dogs.

Going on the premise that every one of us must fight the "devil all the time," Pollock shows how some of us, though we may lose the fight, are more conflicted about it when we do. Spanning the years from the mid-1940s to the mid-'60s, in Knockemstiff, Ohio, and West Virginia, residents of these towns cross paths, double-cross each other, and sometimes manage to rescue each other, at least for a short time. A sampling of the residents you'll meet include husband and wife serial killers who scour the area looking for "models" to photograph; a traveling preacher and his jealous wheelchair-bound companion; a dandy preacher who enjoys defiling young ladies in his congregation; and a sheriff sucked into the corruption on his beat. The gritty The Devil All the Time has made it onto my Favorite Books of 2012 list.

Meet the Author: Doesn't he have the face of someone who'd write a book like this? And the name to go along with it? He also has the background, too. It may surprise you 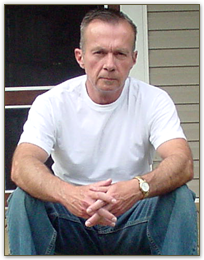 to know that Knockemstiff is the name of a real town—well, holler—in Ohio. Donald Ray Pollock dropped out of school at 17 to work in a meatpacking plant, then spent 32 years at a paper mill. His life does get better. He's still married to his first wife, and he graduated from college in 2009 and published the short story collection Knockemstiff, which earned the 2009 PEN/Robert Bingham Fellowship. Can't wait to see what Donald Ray writes next. Read more about him at http://donaldraypollock.com/.
By Tressa Fancher