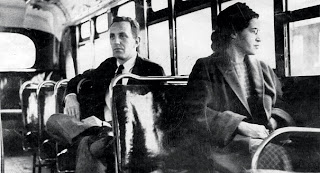 The civil rights movement was a world-changing crusade for equality under law for African-Americans in the United States. In Alabama, the struggle was sparked by a single act of civil disobedience by Rosa Parks in Montgomery in 1955. It awakened the conscience of many to the plight of African-Americans, especially those residing in the South. And the world took notice. Alabama was the site for many defining events of that era, with major campaigns characterized by protests and civil resistance. Boycotts, sit-ins, marches, and other nonviolent activities pushed for the equal treatment of African-Americans and desegregation.

Patrons can read and learn about the civil rights movement with materials and resources provided in our libraries. Some recommended readings are:

“Devil in the Grove” Undoubtedly the most impressive and compelling attorney in U.S. history, Thurgood Marshall was preparing to argue the landmark case of Brown v. Board of Education before the U.S. Supreme Court when he became enmeshed in a volatile case that not only endangered his life, but also threatened to change the course of the civil rights movement.

“The Montgomery Bus Boycott” The author provides an in-depth look at the people and events surrounding the Montgomery Bus Boycott and the role it played in the Civil Rights Movement. Conducting interviews with those involved, and citing news articles, police reports and legal documents, both sides of the issue are explored and presented in a factual and un-biased manner.

“Dreams and Nightmares” One man dreamed of a country united in true racial equality; the other saw the issue as a nightmarish struggle against the wishes of the wealthy white. Both men were sons of Baptist ministers. Both fought for their race, their people. Both were icons of the civil rights movement. Both gave their lives for the cause.

“Carry Me Home” Diane McWhorter, journalist and daughter of a prominent Birmingham family, weaves together police and FBI documents, interviews with black activists and former Klansmen, and personal memories into an extraordinary narrative of the city, the personalities, and the events that brought about America's second emancipation.