Both Sides of the Lens: Photographs by the Shackelford Family, Fayette County, Alabama (1910-1935) 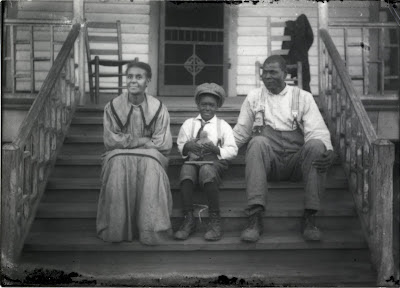 Birmingham Public Library (BPL) will present Both Sides of the Lens: Photographs by the Shackelford Family, Fayette County, Alabama (1910-1935) featuring 40 photographs from this collection of early 20th century glass plate negatives. The exhibition opens in the Fourth Floor Exhibition Gallery of the Central Library on Monday, July 23 and runs through Friday, September 14. An opening reception will be held in the Arrington Auditorium followed by a tour of the exhibition on Tuesday, July 24 at 6:30 p.m. The reception will feature a lecture by Dr. Psyche Williams-Forson, Associate Professor of American Studies at the University of Maryland, College Park.

The photographs—rich for their visual record of everyday life in rural Alabama—are also remarkable because of the story behind them. Taken by a family of African-American photographers who lived in Covin, Alabama, the images reveal the lives of the photographers as well as those being photographed.

Featuring African Americans and whites who lived in or were traveling through the county, the images illustrate the significance of the photographic experience in the early 20th century and expose the places, events, and possessions valued by people in the community. The photographs are mostly outdoor portraits of families, children, couples, and individuals often posing with an object they held dear—a book, a car, a pocket watch, a gun, or a musical instrument.

The photographs were produced by one or more members of the family of Mitchell and Geneva Shackelford of Fayette County. As large landholders who also owned a general store, the Shackelfords were well known in the county and were prominent members of Covin’s African American community. The couple was instrumental in forming a school and Baptist church in the first two decades of the twentieth century. After Mitchell’s death in 1919, Geneva and her four adult sons continued to farm and accumulate land. “The Shackelford brothers,” as they were called, also owned and operated a saw mill and syrup mill.

Members of the Shackelford family were closely involved in developing the exhibition and will be present at the reception on July 24.

The exhibition is curated by Andrew Nelson, a doctoral student at the University of Maryland, College Park, whose research on this Archives collection inspired the exhibition. Nelson will present a gallery talk on July 26th at noon. The exhibition’s co-curators are Jim Baggett and Kelsey Bates, Archivist and Assistant Archivist at the Birmingham Public Library. All three curators have been working closely with Dr. Psyche Williams-Forson of the University of Maryland, College Park, an expert on African American material culture who will be lecturing on the exhibition during the opening reception on July 24. BPL is also working with the premiere expert on Alabama photography, Frances Robb.

The exhibition is made possible by a grant from the Alabama Humanities Foundation, the state affiliate of the National Endowment for the Humanities.
By Tressa Fancher

Marvin said…
We very excited and hope the public will come to the viewing.
Many thanks to all the people that have maade this event possible especially Andrew Nelson.
Marvin Shackelford
8:17 AM

KJ said…
Marvin, Your family's photographs are already eliciting a terrific response! Even before the exhibit is completed we have had comments from people across the country about the importance of these images. These photographs are a treasure.
9:36 AM

Unknown said…
I believe I have a photo of the Shackelford boys that I found in an almanac in Geneva's house. This exhibit seems so amazing I hope I get a chance to see it one day. Thank you to those who put it together as it is an invaluable piece of the Shackelford history/legacy. Anzette Shackelford
12:36 AM

KJ said…
Anzette, we hope you get to see it as well! And we'd love to see your photo one day if you'd like to bring it by the Archives. The exhibition is at the Fayette Art Museum until just after Thanksgiving.
2:58 PM