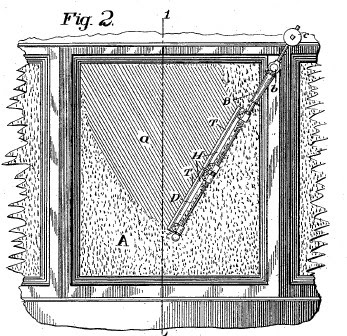 An illustration of Mary Anderson's hand-operated windshield wiper. Another woman, Charlotte Bridgwood, would invent the first automated windshield wiper in 1917; her daughter, Florence Lawrence, invented the first turn and brake signals.
Several Alabamians have been granted patents for inventions of “useful” devices. (The requirements for a patent include the invention’s being “useful.”) The most well-known local inventor is Mary Anderson from Birmingham. She invented the windshield wiper or “Window Cleaning Device” in 1903. Its number is #743,801.

George Washington Carver is probably the most famous inventor associated with Alabama. Credited with hundreds of agricultural products, the Tuskegee professor only had three patents, none of which is for peanut butter. One is “Paint and Stain and Process of Producing the Same,” #1,541,478, patented in 1925.

A surprising patent holder is Erskine Ramsay, one of the founders of Birmingham’s steel industry. He was granted several patents dealing with steel production and mining, such as “Revoluble Car Dumping Structure” (1902) and “Means for Checking and Sampling Miners’ Coal” (1916). These numbers are #701,764 and #1,191,227, respectively.

Another extremely significant Alabama “import” inventor was Wernher von Braun, developer of the American space program. Among his many achievements is a patent for a “Rocket-Propelled Missile,” #2,967,393, granted in 1961.

Inventors come from a variety of backgrounds, from the “real” scientists, like Thomas Edison, to performers, such as Michael Jackson, to children, like Alexia Abernathy (she invented a “spill-resistant bowl” when she was 11 years old). Take a look at some of the dozens of books in BPL’s collection on inventions and inventors; you might be inspired to invent something yourself.

You can view the patents named above on the United States Patent and Trademark Office website if you have certain viewing software on your PC. The specific page is US Patent Full-Page Images. You will find the instructions there.