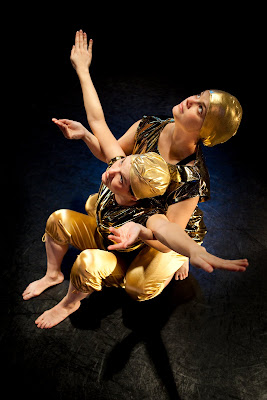 Sanspointe Dance Company will present The Golden Record at three Birmingham Public Libraries between May 21 and May 29. The locations include the Five Points West Regional Library, Central Library, and the Avondale Regional Library. All performances last approximately 20 minutes. The programs are free and open to the public.

In August 1977, NASA sent into outer space the phonographic recording The Golden Record. The recording contained sounds and images selected to portray the diversity of life and culture on Earth with hopes of someday communicating with other intelligent life. Sanspointe dance artists Lynn Andrews and Rhea Speights choreographed a dance response to this cultural capsule—a dance which ranges from satirical to earnest—and makes physical humanity's attempt to project ourselves beyond our own time span.

Sanspointe is a Birmingham-based professional modern dance company founded in 2003. To learn more about Sanspointe visit www.sanspointe.org or call 205-344-0598.
By Tressa Fancher