Book Review: In Spite of the Gods: The Strange Rise of Modern India 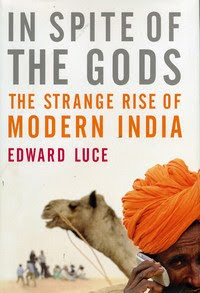 In Spite of the Gods: The Strange Rise of Modern India
Edward Luce

When it came out in 2007, this picture of India received almost uniformly positive reviews, but when I saw a favorable blurb on its cover from William Dalrymple, that’s all the recommendation I needed. Every Dalrymple book is a gem, and he’s written several notable ones on India. Like Dalrymple, Luce is a Brit transplant to India. He covered the nation for the Financial Times newspaper in the years running up to the publication of this book. In Spite of the Gods is very assured and is a pleasure to read. It’s by turns fun, scary, hilarious, shocking. Well-informed, it very seldom puts a foot wrong. It’s problematic for a European-derived Brit to write about India, given the complex and tragic history between the two nations, but Luce does a very good job of being fair.

For instance, when you think of India, do your thoughts turn to religious violence? It’s true that this is a painful reality for the country, but as Luce reminds us “…there is nothing in India’s history that could approximate to the mass killing Europe has suffered.” Luce doesn’t shy from the negatives of India, and they are plenty: corrupt politicians and civil servants, bribery seemingly everywhere, hideous poverty and a common obliviousness to the poor, the failures of socialism, the failures of capitalism, a grindingly slow judiciary—on and on to the point where the reader wants to throw up his hands at the sheer hopelessness of it all. And yet. And yet. India, more than any other large third world country, has shown that democracy can work. More than a billion people, divided by caste (In India, the saying goes, you don’t cast your vote, you vote your caste), religion, class, language, wealth, history—yet democracy binds them together. With one brief exception, India has not stooped to dictatorship since independence in 1947. Despite its division, it is remarkable for its tolerance, for balancing overwhelming diversity, for transitioning from medievalism to modernity. These are not small achievements. Think China is a miracle success? It’s clearly second to India. This book shows why.

Though Luce can be kind—even proud—of India, he seems on a couple of occasions to be almost an apologist for colonialism: “For more than two hundred years Britain’s cadre of district collectors saw themselves as ‘Platonic Guardians’, an elite which remained deliberately aloof from the masses but which governed in their interests.” Translation from the Lofty: white supremacy is good stuff. Though Luce shows the shortcomings of this attitude, he isn’t hard enough on the colonialists. They weren’t only “detached” but typically contemptuous and condescending toward Indians. They didn’t just leave India with “ineptitude,” as Luce correctly puts it. They often ruled with it.

Complaints aside, there is much here that fascinates-and much that’s unsettling, from the Untouchable caste movement that left Hinduism and converted to Buddhism by the millions, to the RSS Hindu fundamentalists who, at times, are uncannily similar to their Christian Right counterparts in the U.S. From the fact that what Americans and Brits call the Mutiny of 1857 is called by Indians the First War of Independence to the reality that many Indians consider that having nukes means that India is a first-rate power. From the leaps in education, literacy and productivity that have come from the liberalization of the economy to the many instances where, as the result of this liberalization, India seems to have, in the words of Gandhi, imported the unhappiness of the West.

In Spite of the Gods puts you right into the flux and chaos that is India. It’s a very wild ride indeed.