Book Review: The Gift of Fire/On the Head of a Pin: Two Short Novels from Crosstown to Oblivion 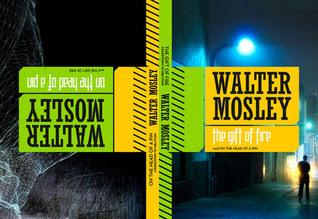 Walter Mosley has released a new book which consists of two short novels in one volume. The two novels are The Gift of Fire/On the Head of a Pin. The novels are a departure from his more popular detective series. They are science fiction titles which deal with the expansion of human consciousness , somewhat similar to his 1998 title Blue Light. They place the protagonists into contact with beings, dimensions, and possibilities to which humans are unaware.

The Gift of Fire is a modern retelling of the Crosstown to Oblivion series of novellas, presented in a single flip-over volume. Unless you are versed in Greek mythology, you may not pick up on all the references in the novel, but don’t worry, the story becomes clearer once Prometheus lands on Earth, becoming a seven-foot-tall black man named Foreman Prospect. He is promptly jailed, where he gives the gift of the Second Fire to a man, who becomes his friend.

On the Head of a Pin—Joshua Winterland and Ana Fried are working at Jennings-Tremont Enterprises. JTE is developing advanced animatronics editing techniques to create movies that will rival live-action. Long-dead stars can now share the screen with today’s A-list. However, things are not as they seem.

If this sounds like something that you would like, reserve your copy today. If you are interested in other titles in the Crosstown to Oblivion series, the next volume, Merge/Disciple, will be released on October 2, 2012.