"A Reputation Worth Campaigning For": Richard III and the Judgement of History 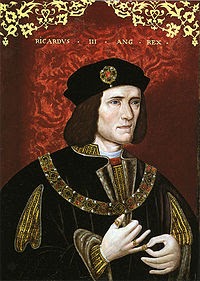 How many kings have their own fan club?

Next Wednesday, August 22nd, marks the anniversary of the Battle of Bosworth Field, in which Richard the Third became (as of this date) the last English king to die in battle and Henry Tudor began his reign as Henry the Seventh. Even now, more than five hundred years after the decisive battle, controversy rages around the man who died on the field but lives in the arguments of hundreds of his defenders who claim that Richard Plantagenet is the target of one of the worst smear campaigns in history.

In popular culture, the Richard-as-villain image is supported by Shakespeare’s brilliant drama: Richard the nightmare, the “bottled spider” and “poisonous bunch-back’d toad” with a twisted soul and deformed body to match is one of the Bard’s most chilling characters and has been memorably portrayed by actors such as Laurence Olivier, Ian McKellen, Antony Sher, Kenneth Branagh, and Kevin Spacey. This Richard is a schemer of the first order, audacious enough to court a woman and carry out her seduction practically over the coffin of her dead father-in-law, not to mention arranging to have his young nephews murdered in their beds in the Tower of London.

However, as Richard’s defenders are quick to point out, literature is not history. Henry the Seventh was the grandfather of Queen Elizabeth the First and Shakespeare was definitely not going to lose his living (or his life) by giving Richard any credit. The divide between Richard’s detractors and his defenders can be traced back to the period immediately following the battle, in which the York city records note that “. . . King Richard late mercifully reigning upon us was through grete treason . . . piteously slane and murdered to the grete hevynesse of this citie.”

Today, Richard’s defenders and/or anyone with a general interest in the king and his historical period can join the Richard the Third Society, which in its Mission Statement encourages research into Richard’s time and the facts concerning his life and accomplishments. The original Society is based in the UK but has an American branch as well. In response to why such an organization should exist, the Society’s patron, who is the current Duke of Gloucester (one of Richard’s titles during his lifetime), states that
“even after all these centuries the truth is important. It is proof of our sense of civilised values that something as esoteric and as fragile as reputation is worth campaigning for."

Richard III---monster, martyr, or simply man of his time? You decide.

For more on King Richard and his world:

The Sunne in Splendour: a novel of Richard III / Sharon Kay Penman

The Daugher of Time / Josephine Tey