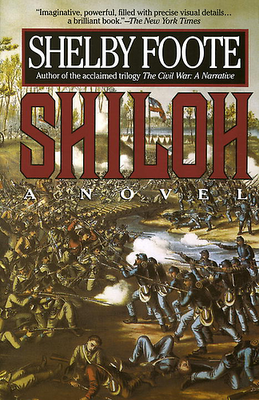 Shiloh
Shelby Foote
The 150th commemoration of the Civil War is taking place through 2015. There were several major battles with horrific casualties, but one that was fought in 1862 was the most devastating up to that point. (It eventually became the seventh most costly.)

The novel Shiloh by Civil War historian Shelby Foote approaches the events of this battle using six main characters: three Confederate soldiers and three Union soldiers. The Confederates are represented by an aide-de-camp for Johnston, a rifleman, and a cavalry scout. The Union soldiers are an adjutant, a canoneer, and a “Squad.” Each soldier participates in a different phase or area of the Battle of Shiloh.

The Union canoneer, Private Otto Flickner, for example, is in a location where his battery must regroup at least three times. He discovers he is too tired and discouraged to continue fighting after several hours. Flickner, like many others he has seen, walks away from the action, tired and scared. He joins others who have walked away, who aren’t ashamed to call themselves cowards. Re-thinking his actions, Flickner eventually decides to return to the fighting.

Sergeant Jefferson Polly is a scout for Colonel Nathan Bedford Forrest’s cavalry. He discovers that Buell will surprise the Confederates with reinforcements he brings in during the night of April 6-7. Polly’s narrative combines the “present,” his scouting expedition, and the past, as he tells about his own life and his encounters with Forrest.

This combination of detailed historical fact with six points of view gives perspectives that most likely did exist among real soldiers. They came from different backgrounds but with one purpose: to fight for their side, even though they might question why they were fighting at all. And each experiences in some way the personal effects of war: shock, disillusionment, fear, pain, and death.

*Ordeal by Fire: The Civil War and Reconstruction, James McPherson