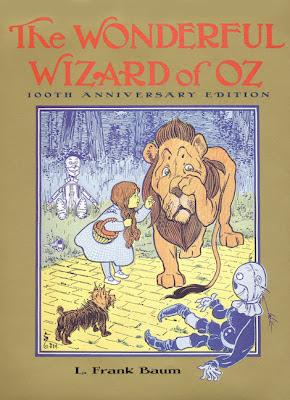 Told myself it was too late to read this as I missed the youth window of opportunity. Eventually read that age doesn’t matter with this one as it’s an all-ages title. Still didn’t read it. Never read it despite the fact that I’ve seen the famous 1939 movie at least seven times. Got tired of telling people my whole life that I’d never read it. Felt unnecessary regular guilt. Felt unnecessary librarian guilt, which overlapped with the former but exceeded it. Bought a copy at the library bookstore a year ago but still didn’t read it. Finally read it.

And it was good, more than worth it. Yes, it doesn’t matter how old you are. As an adult (or teen, for that matter) you’re going to pick up on all sorts of things in it no kid ever would. (Kind of like a Pixar movie, in a way). I’d encourage any adult to read it, because the adult overtones alone are more than justification.

One obvious thing that adults will appreciate is that the story isn’t at all what you’d expect. It is very different from the MGM movie, which was loosely based on this, the first Oz book. There’s still Dorothy and her three friends, but the Wicked Witch of the West is a smaller, less-threatening presence. The winged monkeys are contract workers and are thus neither inherently bad or good. And Dorothy and Co. have several adventures that don’t figure into the movie whatsoever.

One grown-up feature is Baum’s deft political satire. Almost everyone in Oz is afraid of someone believed to be more powerful than they are, and the objects of fear are in turn afraid of the fearful. Even when their inadequate rulers are removed, the people of Oz quickly clamor for new ones. When the Wizard, for instance, escapes from the Emerald City, the townfolk install the Scarecrow, reasoning that his Wizard-given brain will make him a wise leader, “For,” they said, “there is not another city in all the world that is ruled by a stuffed man.” In addition to the unimaginative, the vacuous also come in for a ribbing. In one scene, the Scarecrow tells Dorothy that she should appreciate Kansas, dry and gray though it may be: “If your heads were stuffed with straw, like mine, you would probably all live in the beautiful places, and then Kansas would have no people at all.” What’s the matter with Kansas, indeed.

The religious satire, unlike the political, is less direct. The following scene concerns a deus ex machina involving the Wizard and is indicative of how Baum lightly presents a scenario that only suggests a comment on religious folly after you’ve read it, and then gently. Here the Wizard is telling Dorothy how he came to Oz from Nebraska in a hot air balloon. A plains stage magician, he confesses that he “found [himself] in the midst of a strange people, who, seeing me come from the clouds, thought I was a great Wizard. Of course, I let them think so, because they were afraid of me, and promised to do anything I wished them to.” There’s that Oz fear again, only here it serves more of a religious end rather than a political one. Ultimately, of course, they’re part of the same ball of wax, and Baum is often gleeful showing the different facets of the ball.

In a scene set in a poppy field, Baum not-so-indirectly criticizes Victorian prescription (and other) drug addictions: “Now it is well known that when there are many of these flowers together their odor is so powerful that anyone who breathes it falls asleep, and if the sleeper is not carried away from the scent of the flowers he sleeps on and on forever.” It’s no idle comment: soon the Cowardly Lion succumbs to the poppies and has to be rescued. I am sure that there was never any thought of putting this scene in the movie. It’s hard to fit music to this; it’s not exactly Harold Arlen territory.

As we know, the Lion seeks courage, the Scarecrow brains and the Tin Woodman a heart, something each one of them is convinced they don’t have, but which they of course do. But there’s a wrinkle here that once again wouldn’t have made it into the film, or even a children’s movie now. Each of the three friends introduces himself as harmless, and each starts off this way. Later, though, each engages in ecstatic violence, even the Tin Woodman who constantly frets, Jain-like, over the possibility that he might accidentally trample on a live creature. This doesn’t hinder him from blithely chopping up scores of enemies in order to protect Dorothy and his pals. Is this authorial laziness on the part of Baum? Or is there is an intentional, sarcastic undermining going on? Considering all the other subversive things Baum has going on in his book, it’s easy to choose the latter.

Even though I’m straight, I couldn’t help but see some obvious gay content in the The Wonderful Wizard of Oz. The fact that the Wizard himself cross-dresses isn’t the least of it. Even accounting for the possibility of the historical fallacy (projecting current concerns onto historical sources), there is, I think, something more than slight pink traces in at least a few of the happenings in Oz. The book evidences some not exactly stereotypical late-Victorian values. Curiously enough, Gore Vidal, of all people, wrote a long article on the Oz books for The New York Review of Books some decades back and didn’t mention any gay overtones. (The piece is excellent, nevertheless, and is in United States: Essays: 1952-1992). Doubtless gay and lesbian readers will pick up on a few things I didn’t notice.

A little of L. Frank Baum’s language harkens back to Lewis Carroll’s Alice books, which Baum in fact claimed as an influence. Witness the Tin Woodman’s sanely loopy reasoning in one passage: “For my part, I have no heart: so I cannot have heart disease.” The Lion, for his part, seems to prefigure Samuel Beckett’s Waiting for Godot in this reflection: “You see…I haven’t the courage to keep tramping forever, without getting anywhere at all.”

The Wizard, deep as it may be, hasn’t been saddled with anything remotely like the endless commentary strapped to the Alice books (with its Zen Buddhist monk fans, postmodern literary critics and a galaxy of others). The main reason it’s not like the Carroll books is that it is much more purely a book for children. As for the adult content, by no means am I suggesting this is a dry book-quite the opposite. It is, more than anything, an adventure story that never lets up, one that lets an adult be a kid again and still enjoy an adult experience. Maybe I should be glad I waited this long to read it.