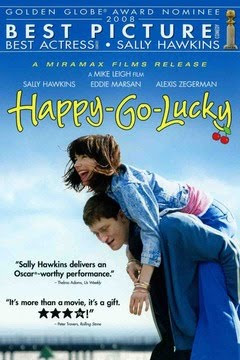 Happy-Go-Lucky
A Film By Mike Leigh

I’m a repeat viewer when it comes to movies directed by Mike Leigh. Except for a couple of cases, I’ve watched all of his movies at least twice and usually six or eight times. They are dense, multi-layered and as close as movies get to viewing actual life-dramatic, captivating real life, that is. A better comparison is that they’re as close as movies get to a good novel you want to read again and again.

Leigh and his actors prepare like no one else. They spend months developing characters through extensive improvisations. (To give an idea of how rare this is, the late director Stanley Kubrick used his considerable clout to arrange an almost unheard-of couple of weeks for rehearsals). They start from nothing and build characters until they’re at the point where they react and emote like their characters would in a large variety of situations. Then they’re introduced to characters they haven’t met. In theory, it’s like two actual people meeting. Only late in the game is a script written, and then it’s refined until everyone feels comfortable with it. By this point characters are fleshed out to an extraordinary degree. Actors go out of their way to work with Leigh and usually look back on the experience as one of the high points of their acting life. Jim Broadbent, Gary Oldman, Stephen Rea, and David Thewlis are some of the better-known actors who’ve worked with Leigh, who’s won top prizes at European film festivals. His best known film is probably Secrets & Lies, which is to me one of the best movies of the last twenty years. Probably no movie in history has dealt with the issue of race better than Secrets & Lies.

Many of Leigh’s movies are downbeat, so it surprised everyone when Happy-Go-Lucky came out. It’s the story of “love,” in Leigh’s words. It centers on Poppy, played by Sally Hawkins. Vivacious, extroverted, ebullient, fearless, hilarious, mischievous—Poppy brings love to all she comes into contact with and she’s a catalyst for all as well. Watching Hawkins/Poppy is like taking deep breaths of clearest mountain air, like dancing through lawn sprinklers bare-footed. To say it’s life-affirming is like saying cars transport you.

At first you think she’s a chucklehead. When she finds her bicycle’s been stolen she laments out loud to the London street that she didn’t even get a chance to say goodbye to the bike. But Hawkins soon deepens and expands Poppy to where you see an enormous range of emotions, characteristics, ticks, quirks, and sensibilities under her sunny surface. We see that she can be so joyous because she is in fact tough as nails. In one scene, she wanders alone at night into an abandoned industrial building, lured only by the sound of a man’s voice mumbling apparently bizarre nonsense. She meets the man, who’s strange and scary and who may at any time try to beat her or rape her, but he doesn’t. Incredible tension rises, dissipates, rises again. She reaches out to him, trying to connect, freely giving compassion. A bit of his talk beings to make sense—but only a bit. He takes some of her understanding, then wanders off, mumbling as he goes. There’s no saint-making here; it’s just believably real.

The main relationship in the movie is between Poppy and Scott, her driving instructor. Scott’s so wound up his body could crush subatomic particles. He’s angry, afraid, bigoted, clenched, and a nutter besides—he’s the anti-Poppy. He also wants to possess her. Leigh and Eddie Marsan, the actor who plays Scott, developed this character for a very long time, then Leigh introduced Scott to Poppy. Sparks flew. The bouts between Scott and Poppy are brilliant—incredibly tense, hilarious, wrenching. You feel like you’re in the car and you never know when it’s going to crash. (This was achieved partly through innovative rigging of multiple cameras throughout the vehicle. The two actors are literally driving.)

There are too many miracles in Happy-Go-Lucky to mention in a short piece like this. It’s as different from a regular movie as a 3-star feast is from leftovers. Only it’s free and at the library, so it’s even more of a boon.