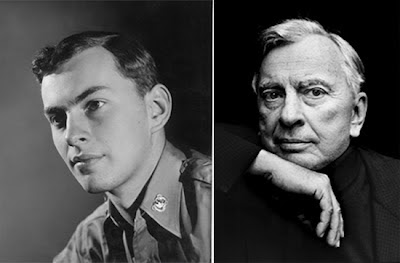 Writing in memory of Gore Vidal is, sadly, much like writing an obituary of an old friend. Many of us have been reading Vidal’s new works for decades, for nearly as long as we have been reading serious writing. Which is not to say he wasn’t funny. Acerbic is a word often used to describe Vidal, but always paired with the word wit. With his death a breed is extinct, the public intellectual.

He was arguably bred a public figure. He jokingly said he knew his father best from watching newsreels and was close to his grandfather, the famous blind Senator Gore from Oklahoma. His mother was a famous beauty and his step-sister was Jacqueline Bouvier Kennedy Onassis. Vidal’s family was part of the political elite and when he wrote about political leaders, as he did, and often, it was from direct experience of the type.

After graduating from St. Albans and Phillips Exeter he became a naval officer serving in Alaska as WWII wound down. On mustering out, he quickly published Williwaw, which was well reviewed. Only nineteen, young Gore was one of the very first of the WWII writers. Two more novels quickly followed and then he became notorious with his fourth, The City and the Pillar, a novel with a sympathetic homosexual protagonist, a landmark of American fiction that cast him into literary limbo. Prejudiced reviewers refused his work fair consideration for years, but Vidal was undaunted; it was the beginning of the next phase of a grand life.

After rambling around war torn France and Italy for years with his friends Tennessee Williams, Paul Bowles, Christopher Isherwood,and young Truman Capote, Vidal took his writing talents to Hollywood, writing teleplays and doctoring movie scripts, including Ben Hur. (Directing Charlton Heston, he said, must have been like animating a lumberyard.) Writing also for Broadway, (Visitor to a Small Planet and The Best Man) Vidal bought a Greek Revival manse in the Hudson Valley, which he shared with the Newmans, Paul and Joanne, when they were working in New York. He lived in their Malibu home when working in Los Angeles, a time of life he later remembered as a continuous cocktail party and as the time of meeting his longtime companion, Howard Austen.

Famous and financially secure, Vidal was encouraged to run for congress by his Hudson Valley neighbor, Eleanor Roosevelt, who became his friend and campaign advisor. Although he lost in the heavily republican district, he ran ahead of his step-sister’s husband Jack (JFK), and briefly became a part of the Kennedy Camelot. (Imagine Gore and Jack shooting skeet with Tennessee Williams, an improbably good shot.) With his good looks, urbane baritone voice and cool wit, Vidal was so successful on TV that he was offered a guest host spot for The Tonight Show by Carson, but, instead, Vidal raised his literary game, beginning his second career as a novelist and essayist.

Vidal returned to Italy, to the American Academy in Rome to research Julian, his acclaimed historical novel about Julian, the Apostate, the Roman emperor who tried, and failed, to return the empire to the worship of the ancient gods. Success followed upon success with the publication of Washington, DC, the first of six widely admired novels spanning American history, and Myra Breckinridge, his favorite novel and the first of his “provocations,” works on sex and religion, missionary positions never assumed.

His essays were even more admired. Often published in The Nation and in The New York Review of Books, they were widely read and discussed, sometimes derided, but never entirely dismissed. An ardent critic of American militarism, he made, and relished many enemies, saying “The four most beautiful words in our common language: I told you so.”

He and Howard Austen lived much of the remaining decades of their lives in Italy. They had a Roman apartment overlooking the ruins of the Teatro Argentina and a beautiful old villa perched high on a cliff on the Amalfi coast. Vidal, Il Maestro, became part of the village scene, received the renowned, numerous guests as various as his friends, Princess Margaret, Mick Jagger, and Hillary Clinton (“lovely manners”). And it was here where most of his prodigious literary output was written, in airy rooms overlooking the Mediterranean far below. A literary interview, from the middle of this productive period, published in The Paris Review, can be found here: http://www.theparisreview.org/interviews/3917/the-art-of-fiction-no-50-gore-vidal.

Vidal wrote twenty-five novels, two autobiographies and hundreds of essays. He even wrote a beautiful travelogue of Venice, Vidal in Venice. The essential Vidal would certainly include Julian and Myra Breckenridge, mentioned above, but also his historical fictions Burr and Lincoln, his collection of essays (one of many) The United States for which he won the National Book Award, and his lovely memoir, Palimpsest.

“Of course it had,” Mr. Vidal later wrote. “We had been too happy and the gods cannot bear the happiness of mortals.”

Vidal will be buried next to Austen in Rock Creek Cemetery (Washington, DC) near the grave of one of his literary heroes, Henry Adams.

Be sure to visit the official website of Gore Vidal.

“Style is knowing who you are, what you want to say and not giving a damn.”

“Andy Warhol is the only genius I’ve ever known with an IQ of 60.”

“A narcissist is someone better looking than you are.”

“The United States was founded by the brightest people in the country—and we haven’t seen them since.”

“It’s not enough to succeed. Others must fail.”

“The four most beautiful words in our common language: I told you so.”

Unknown said…
"Gore had style" You could not have began any better, this descript made me smile from the start as I am certain Mr. Vidal would agree himself. I remember as a young teen secretly reading a worn copy of Myra Breckinridge. I saw a hardcover at 2nd & Charles and found myself shy of even touching the book. I wonder why? I think it should certainly be required reading at some stage in academia! Thanks for you post. May Vidal Gore's spirit soar as he did in this life. Peace.
8:37 AM

Isn't it grand that Myra, after some 40 odd years, still makes people blush?

I have been reading essays from United States this week. Vidal writes better than anyone else since I last read Gore Vidal.