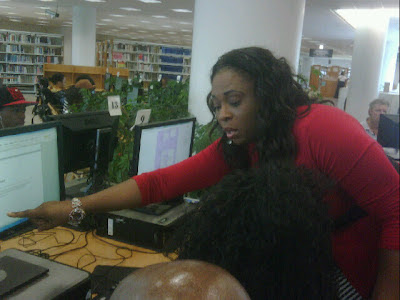 Syretta Powell helps a BPL patron in the Computer Commons
Mary and Salmon Pullum were en route to a big job fair in downtown Birmingham this morning, when something stopped Mary cold.

While reviewing her husband's resume, Mary found some mistakes. She wondered how they could get them fixed and get them fixed fast. Mary remembered how her daughter had spent recent afternoons, using the computer at the library near their Trussville home. Just like how her daughter had worked on the library computer near their home, Mary figured she could do the same at the Birmingham Public Library's Central location.

Mary said she was pleased at what she found today.

"They've been wonderful. They are very knowledgeable,'' she said of the staff in the Computer Commons area on the third floor of the Central location. "This is our first time here.''

The couple worked on the resume for about an hour before leaving for the job fair, which Congresswoman Terri Sewell presented at the Birmingham-Jefferson Convention Complex. Registration opened at 9 a.m. and the fair was to continue until 3 p.m. today.

The Pullums weren't the only ones working on resumes this morning. People started lining up outside of Central as early as 8:30 a.m. to use the computers to work on resumes or print resumes.

"We have busy days every day. But today is a lot busier than normal because of the job fair,'' said Syretta Powell, a Library Assistant II.

"To be honest with you, this is triple the number of patrons we normally have. Ninety percent of the people we've helped today, have actually been in to fill out resumes for jobs.'' (By 2 p.m., they had helped at least 50 people with resumes.)

Hugh Hardy, a Library Assistant III, said patrons have also been in to work on web-based job applications and order government-issued phones.

Hugh, Syretta and co-workers NaTasha Carpenter and Sky Booker have been answering questions all morning about resume formats, templates and more.

"It's probably going to be like this until 3 p.m.,'' Hugh said. "You get a good feel of how many people don't have a job, just by looking at the number of people coming by this morning. I heard the line for the job fair was wrapped around the (BJCC.).''

In order to use the library computers, patrons must have a valid library card or a PC Card, both issued at the Information/Circulation Department on the first floor. There is no charge to use the computers. There are also materials on the third floor, which is where the Business, Science and Technology Department is located. For more info, call 226-3680. Resume assistance is also available in the Regional Library Computer Center on the fourth floor of the Linn-Henley building. Call 226-3402.

Unknown said…
Thanks for knowledge share, I will be waiting for more in future