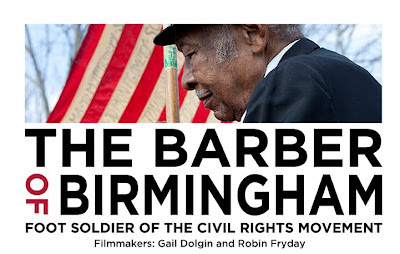 The Birmingham Public Library system is getting a head start on celebrating the 50th anniversary of the civil rights movement in Birmingham by showing the Academy Award-nominated film The Barber of Birmingham: Foot Soldier of the Civil Rights Movement, September 12-October 22, 2012.

The film is about Birmingham barber and civil rights activist James Armstrong and what he did to fight for equality in Alabama. There will be 14 free screenings at 13 library branches. Discussions will follow each screening. This event is a collaboration with POV (Point of View), the award-winning independent nonfiction film series on PBS. The film was produced by Gail Dolgin, who died in October 2010, and Robin Fryday. Both women are from California.

Starting in January 2013, Birmingham will mark 50 years since the start of the civil rights movement. In 1963, Armstrong won his fight to integrate Birmingham's Graymont Elementary School. His two sons would become the school's first black students. "We already have programs scheduled for 2013. This is just the beginning,'' Sandi Lee, eastern region coordinator for the Birmingham Public Library, said of how the library system will recognize 1963.

Armstrong continued fighting well after 1963. In March 1965, he carried the American flag at the start of the Selma-to-Montgomery voting rights march, which came to be known as "Bloody Sunday.'' Following 1965, he carried the flag on every march anniversary. He was also a barber for the Rev. Dr. Martin Luther King Jr.

Since Armstrong was a huge supporter of elections, Lee said the library system wanted to show the film before November's presidential elections. Armstrong, who died in November 2009 at the age of 86, never stopped pushing people to go to the polls, Lee said.

"The Barber of Birmingham is just such a moving piece to watch. It says so much to the hopes and the dreams of the people who fought so hard to gain the right to vote and to be the citizens that they wanted to be,'' Lee said. The screenings have been made possible by the Birmingham Public Library, Alabama Public Television, POV, Corporation for Public Broadcasting, and the National Black Programming Consortium.