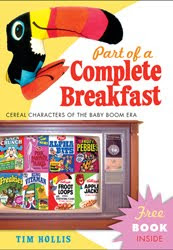 Alabama author Tim Hollis has written a new book that recalls more childhood memories, and you don’t have to have been raised in the South to reminisce along with this one. In Part of a Complete Breakfast: Cereal Characters of the Baby Boom Era, Hollis explores a time in TV history when cereal mascots were more popular than the products they advertised; when commercial catch phrases became part of childhood lingo—“They’re magically delicious” and “They’re grrreat!” The book covers the years from 1950-1979.

Hollis digs up the backstories of some of the most fondly remembered product characters in advertising history. In early stages of development, did you know that Lucky the Leprechaun humored cereal-stealing children a little less and hated them a little more, and that Tony the Tiger walked on all fours and had claws and teeth? What were they thinking?

Part of a Complete Breakfast (yeah, like kids actually eat that piece of toast shown as part of the "complete breakfast," whatever that means) will be published on September 2, but you may reserve it in advance.

Tim Hollis was born in Birmingham and currently lives in Dora, Alabama. He enjoyed writing fiction as a child and worked as an editor for local authors before publishing his first book in 1991, Cousin Cliff: 40 Magical Years in Television. Hollis is the author of 21 books and a contributor to the nostalgic Birmingham Rewound website.

Mary Anne said…
Fond memories here. Lots of those cereals were represented on the old Linus the Lionhearted cartoon (if you remember Linus, you're "vintage" like me)--Sugar Bear, for instance, was a regular on this show. Those were the days.
3:55 PM

Tressa Fancher said…
The commercials back then were as much fun as the cartoons. I still remember the "A is for apple" song on the Apple Jacks commercial. And the Fruit Loops Toucan Sam. Good memories. :-)

Speaking of Linus, remember when holiday specials were actually special? When you had to wait all year to watch them, unlike now where you can own them on DVD and watch them any time you want. Yeah, on one hand it's great but on another...
4:42 PM