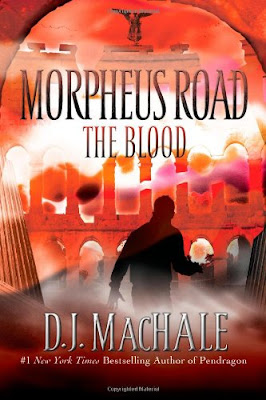 Although there is a brief overview given of the first two books in the trilogy, the concept of the Morpheus Road, using visions to move from spot to spot, and the differences between Watchers and Guardians, creates some confusion if The Blood is the first of the trilogy one is listening to. This reinforces the problem of most audios in a series of any sort as it can be hard to fill in the missing pieces, just as it would be if one were reading the print version instead of listening to the audio. It also makes me feel that the appeal will be limited if 12- to 18-year-olds haven’t listened to the first two in the trilogy.

The narration provided by Nick Podehl certainly creates excitement, terror, fear, and a sense of doom that is perfect for this concluding volume of the worlds of life and death. People exist in the Light [living], the Black [spirit world], and the Blood [home for really bad spirits]. Marshall and Coop take on the task of attacking and neutralizing Damon, whose desire to host one final battle between the living and the dead leads to their fear that the living might lose that battle. Little do they know that there’s an even more evil spirit in the Blood, waiting for his chance to wreak true destruction on Mankind.

Thanks to Podehl’s ability to express the various characters’ nuances in their voices, one immediately picks out the slight Long Island accent apparent in Coop, while Marsh’s voice stays firm and usually self-assured. Damon feels sorry for himself and at times is rather whiny while Brennis is croaky, raspy. When the demons speak, it’s horrible, beyond-raspy sounding words. Podehl also has ability to speed up or slow down his speech and the action verbs of the dialogue alway match his voicing.

The music that begins and ends each disc has a little bit of mystery and some eerie sounds, which fit perfectly with the book. Despite my concerns about appeal, the narration is outstanding.