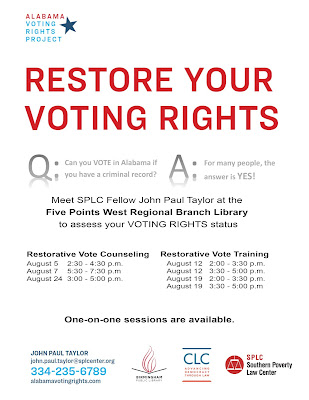 The Five Points West Regional Branch Library is offering a series of free training and counseling sessions during the month of August designed to help Alabamians restore their voting rights.

The Alabama Restorative Vote Training and Counseling workshops are a partnership between the Five Points West Library and Birmingham’s John Paul Taylor, a fellow with the Southern Poverty Law Center’s Alabama Voting Rights Project. Taylor is founder of Real Life Poets, which partners with the Birmingham Public Library to host a civil rights poetry summer camp for teens.

The workshops are the brainchild of Carrie Campbell, who works in the Information Department at the Five Points West Library. Campbell said she has assisted many adults applying for employment, some of whom were formerly incarcerated and concerned how their past mistakes might affect their future.

“Oftentimes they would relate they had been wrongly told that they no longer had the right to vote,” Campbell said. “I contacted my friend John Paul Taylor, a fellow at the Southern Poverty Law Center, and learned about the SPLC's Restorative Vote project. The Birmingham Public Library is excited to work with John Paul Taylor this month at the Five Points West Library to offer both private counseling sessions and training sessions for people who wish to offer this counseling to others. A second chance at life is hard enough; our patrons should at least have their vote and voice.”

Taylor said the Alabama Voting Rights Project is a grassroots partnership between the Southern Poverty Law Center and the Campaign Legal Center seeking to re-enfranchise thousands of Alabama voters. During the workshop/training, Taylor will teach Birmingham area community members how to restore the voting rights of formerly incarcerated people who may be eligible to vote under the Alabama law.

“I am excited about partnering with the Birmingham Public Library because the library is a community resource with branches in every community, which gives access to many citizens that might not have access to these resources otherwise,” Taylor said.

Dates and times for the Restorative Vote Training and Counseling workshops with Taylor are as follows: