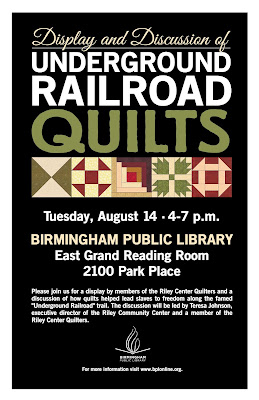 What: Quilt Display and Discussion of the Underground Railroad Quilts
When: Tuesday, August 14, 2018, 4:00-7:00 p.m.
Where: Central Library East Grand Reading Room
Details: Come to see the talented women from the Riley Center Quilters/Riley Community Center share a display of their quilts and lead a discussion of the "Underground Railroad" quilts.

Join the Riley Center Quilters of Birmingham at the Central Library East Grand Reading Room on Tuesday, August 14, 4:00-7:00 p.m., for a powerful discussion of the role quilts played in helping lead slaves to freedom along the famed “Underground Railroad” trail. Members of the group will also have some of their quilts on display.

Johnson has been quilting over five decades since she was taught at age 9 by her grandmother. “This has been my passion,” she said.

The Riley Center Quilters has 25 members ranging in age from 55 to 87. Many will display their quilts showcasing the art of hand-quilting, and participate in the event. Johnson said the panel discussion will educate people about the role quilts played in leading runaway slaves to freedom. Along the route of the Underground Railroad, quilts would let slaves know if the area was safe.

“If you saw a quilt in a window or on a fence it would tell you whether to stay hid or keep on moving,” Johnson said. “A bow-tie quilt was a symbol you need to dress up and look like free slaves. A shoe pattern meant to hide in the woods as slave owners were nearby. Underground quilts were a secret code.”