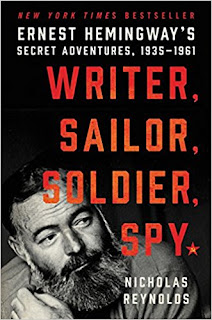 A really good biography does more than provide birth and death dates and dish dirt associated with this marriage or that divorce. An exemplary biography opens a window into the book’s subject. You finish the book and you have some insight into the reasoning behind their deeds, both good and bad. If you’ve read a truly good biography, you might even have the tools to judge if, within the subject’s moral framework, their deeds were committed for altruistic or selfish reasons.

In Writer, Sailor, Soldier, Spy Nicholas Reynolds posits that from 1935 to his death, Ernest Hemingway spied for the Russians. He presents a great deal of what some might deem to be "circumstantial evidence" to support this opinion. Reynolds himself acknowledges that Hemingway spying for the Soviet Union “…is a collection of fragments, some of them wrong or only partially right. But the fragments create a pattern, and the imperfections add to the ring of authenticity.” These "fragments" consist of documents from the FBI and the KGB’s predecessor— the NKVD. Reynolds is particularly swayed by the evidence from former KGB officer Alexander Vassiliev.

As psychological evidence, Reynolds discusses at great length the world events that Hemingway took part in, and how these events shaped his politics, his art, and created contradictions bordering on fractures in his character. He saw firsthand the victims of violent fascism in Spain’s civil war, and bodies left in the wake of an indifferent Democracy in the Florida Keys. The rugged writer believed in self-reliance, but possessed a soft streak for the weak of the world. He showed the loyalist propaganda film, Spanish Earth, to President Franklin Roosevelt yet wrote for Pravda. Afterwards, Hemingway’s own words seemed to convict him of being sympathetic to Soviet philosophy.

Another reason for Hemingway’s possible loyalty to Russia was the war. For a time, Russia was the only nation actively fighting the Nazis. Like many artists of the time, Hemingway reasoned that if you were anti-fascist you had to be pro-Soviet. Late in life Hemingway even referred to himself as being a “premature anti-fascist.”

Or perhaps Reynolds is being needlessly complex. Perhaps the Russians simply coerced Hemingway into spying? But how would the Soviets have pressured the fearless, big game hunter Hemingway? Even today, intelligence officers ask several basic questions when approaching a potential asset. Is he susceptible to offers of money? Will he spy because of ideology? Can they appeal to the target’s ego? Would it be more effective to use embarrassing photographs or other compromising material? (In Russian, compromising material on a potential asset is called kompromat.)

After reading Writer, Sailor, Soldier, Spy, you will see a side of Hemingway not normally covered in literary biographies. You’ll also be able to answer if Hemingway did indeed spy for the Russians, and if you’re convinced that he was a spy, you’ll know the nature of his reasons.
By Tressa Fancher