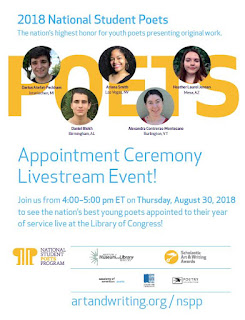 A Birmingham student is among five teens from across the country chosen from among thousands of award-winning poets to serve as National Student Poets, the nation’s highest honor for youth poets presenting original work. Daniel Blokh, a senior at the Alabama School of Fine Arts in Birmingham, will participate in a pinning ceremony taking place live at the Library of Congress in Washington, D.C., on Thursday, August 30, between 3:00 and 4:00 p.m. (CST).

The National Student Poets Program is an initiative in partnership with the Institute of Museum and Library Services (IMLS), the nation’s primary source of federal funding for museums and libraries, and the nonprofit Alliance for Young Artists & Writers, which presents the Scholastic Art & Writing Awards. The ceremony will be livestreamed through the Library of Congress YouTube site.

Each National Student Poet will have an opportunity to read their poetry during this event and be honored and congratulated by the Librarian of Congress, Director of the Institute of Museum and Library Services, Executive Director of the Alliance for Young Artists & Writers, and other surprise guests. The Birmingham Public Library was invited by IMLS to serve as Alabama’s host site for the livestreaming of the pinning ceremony since Daniel Blokh is from Birmingham. Educators, students, writers, fellow poets, and others in the community are invited to view the live webcast from the Central Library.

To be considered for appointment as a National Student Poet, students first must receive a National Medal from the Scholastic Art & Writing Awards, the nearly century-old program known for its recognition and celebration of the country’s most creative teens. This year, out of a pool of more than 23,000 works of poetry submitted to the Awards, 35 semi-finalists were invited to submit additional poetry and performance videos to distinguished jurors for final selection as National Student Poets.

Throughout the year, the Poets will serve as literary ambassadors and will share their passion for poetry and literacy with their communities and at libraries and museums throughout their regions. This will be done through service projects, workshops, and public readings. In addition, each poet will receive a $5,000 academic award. The National Student Poets Program is open to high school sophomores and juniors who submit work to, and receive a national medal from, the Scholastic Art & Writing Awards.
By Birmingham Public Library