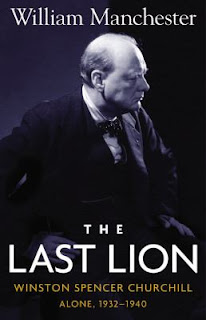 Appeasement, appeasement of Hitler, is so strongly linked with the British Prime Minister, Neville Chamberlain, that it seems like personal fecklessness, a mistake made by a single powerful man. In fact, appeasement was a policy position with nearly universal support in the British Parliament, and among the British people. After the horrific trauma of the Great War, World War One, it was inconceivable to the British, and to the French, that anyone would want to descend once more into industrialized warfare and slaughter. They were wrong. Hitler wanted war. Winston Churchill stood up to Hitler, and he was alone.

The second volume of a trilogy, Alone, is the story of that period when Winston was out of power. He had held several of the highest offices in the British government, but in 1932, considered a warmonger and a relic of the past, Churchill was shunned as the opportunity to deal with Hitler slipped away. But he still had his voice.

Alone describes a world very different from our own. Britain ruled the waves—it was the only world power—and the British Empire was at its territorial zenith, controlling more than a quarter of the Earth’s surface. A small group of privileged men in London made decisions affecting millions of people thousands of miles away. They believed themselves to be great men, and Churchill certainly did. Because he was out of power during the period covered by this part of the trilogy, the reader is treated with the most intimate portrait of Churchill. Most especially we experience Churchill, the late-night writer, terrorizing his staff as learned books and popular articles pour out of his study at Chartwell, his country home.

The first volume of this trilogy, Visions of Glory, covers Churchill’s youth and his first political career. The last volume, Defender of the Realm, tells the story of the Second World War, Churchill’s prime ministerships, and his decline. Alone covers the period of Churchill’s life many believe to be the most sublime when he fought everyone, by himself, and was right when the entire world needed someone to stand up to Hitler.
By Tressa Fancher